EPISODE 71: The Machines are Taking Over (And That's Okay) 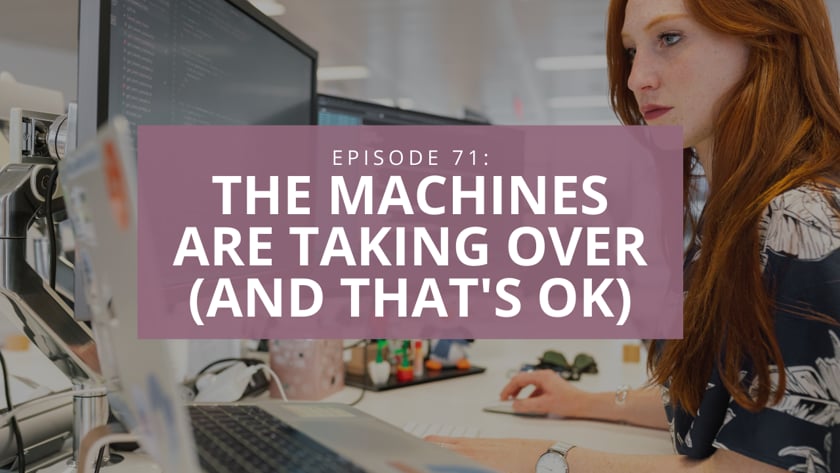 AltaML is a venture studio company. We're looking to build ventures that split off of us through AI and machine learning. We have enterprise organizations that want to work with us on their own AI journey, as well as individual product ideas. They're supported by our team so they can develop as their own entities. It's sort of like an incubator, but we also provide services and opportunities for many businesses that don't end up being separate entities by working with companies to develop and deploy AI solutions in their own business processes. AI requires domain expertise as well as data science knowledge - we bring the data science expertise for other organizations.

(5:16) You started as a real estate broker, and now you're Co-CEO of a thriving AI business in Edmonton. Tell me more about that journey.

I've always been an entrepreneur, including my days as a broker. When I married my husband, we agreed that we could never work together because it could never go well, but somehow it does! We started a digital media business (because my husband came from that industry) in the education industry. We recognized that AI was going to disrupt that industry and we wanted to get ahead of it, so we began exploring ways to generate content algorithmically.

We hired a data scientist hoping he could solve our problems (obviously, it doesn't work that way). Fortunately the University of Alberta is a world-leader in the field of machine learning, which provided us with more talent to draw from. We ended up hiring four data scientists and asked them to develop a solution to this problem we were facing. Little did we know that we were asking them to solve one of the most difficult problems in AI - can we create written articles and blog content without a human being involved? While our team was working through this problem, we were talking to other entrepreneurs who expressed concern over working with AI. We had our team work with them in their spare time, and after a few projects like this we realized "hold on, we have a business here"! FYI, we never did solve this problem for our digital media company. Instead, we've moved on to other problems.

(10:11) How did you realize the commercial opportunity with AltaML?

The mistake we often see is that people think their products or ideas have to be perfect before we sell it. We went out and asked people what they would pay us for the work we do. We listened to what they wanted and shifted things accordingly - each new customer we talked to, we made little tweaks to our model. Of course we still don't have it perfect, but we don't start before having these customer conversations. Even if we know the best way for our company, the best commercial opportunity is usually different.

Receive the next Amplify Your Business episode straight to your inbox!

(11:51) Let's demystify some of the fears around AI and machine learning. Is it really coming for our jobs?

This is one of the hardest things to get around, and it really impacts AI adoption. In almost every case, we haven't eliminated jobs. It has simply removed the annoying parts of many people's jobs. For example, when you take an image scan that a radiologist needs to assess, AI can generate a report based on the image that gives the Radiologist 95% of the information they need to make it a report. AI is helping people to use their full potential instead of spending their time doing things that aren't valuable.

What is important is that we use AI responsibly. If you add an AI model to biased data, it will amplify the bias. In most cases, the individuals generating the data don't realize that there is a bias. We find that our diverse team is able to examine information and determine how it will impact solutions. This is very important to consider when working with AI and machine learning.

(16:57) Talking about ethics, how does AltaML grapple with these types of questions about responsible use of AI and machine learning technology?

Compared to regular programming, AI and machine learning is being informed over time by tons of data generated from tons of people. When AI technology is forced to make a decision, it draws on this information and makes its decision based on the experiences of others. In that sense, it isn't necessarily our team making ethical decisions. What we do have to do is ensure the model doesn't drift and become biased over time. The models need to be tested and maintained over time, and we are part of that steering to ensure it doesn't go in a bad direction. This often involves looking at the data the machine learned from and what led to it making a particular decision. It's not like an intervention per-say, but looking at why something happened the way it did and using different data to inform the model if necessary.

Investment in AI has been accelerated by COVID. There's a recognition that people need to adopt this technology, or companies are going to lose their competitive advantage. We're also seeing this in sectors like healthcare, where leaders are asking how we can use this technology to better serve our population. I think adoption is going to really accelerate. I also think it will become a greater part of our day-to-day lives (many of us already use AI technology on a regular basis). The more people get comfortable with it, the more adoption is going to increase. On top of this, there isn't a large organization in Alberta that isn't looking at AI right now. There is going to be a shift and we need to be ready to embrace it.

We're also going to see standouts in certain countries. China, for example, is pouring tons of money into AI in areas that we wouldn't consider in Canada. I believe Canada will become known as a leader in responsible AI, and we want to be part of that at AltaML. If you told me we would become this large when we started the company, I probably would have laughed at you! At this point, though, I believe we are going to build a billion dollar business, and we are going to keep it in Canada.

(26:28) What is one of the biggest lessons that you've learned during this rapid period of growth?

One of the biggest lessons is that as you grow, your role in the company has to change. The CEO of a 10 person company is very different from the CEO of a 100 person company. It's getting used to letting go of some things and handing them over to trusted people in the company. For example, we didn't have a people team for a long time because we weren't large enough. As we brought that team on, I had to remind myself that these people knew what they were doing. Be comfortable with how your role as founder and CEO is going to evolve with your company. If you cannot, your own capacity will start to slow the growth of the company. If you feel that your role is starting to slow growth, it's time to shift your focus and your role as CEO. Many founders find this process uncomfortable, but it is incredibly important. As an entrepreneur, you need to be adaptable and willing to accept change. Sometimes, we have to make decisions with only 60% of the plan in our minds!

(30:49) You were recently awarded the Emerging Entrepreneur of the Year Award from Alberta Women Entrepreneurs. What does that mean to you as someone who co-helms such a fast growing company?

I was incredibly honoured to be nominated. It's so important for up-and-comers to see the opportunities of where they might go. When you're recognized as an entrepreneur, particularly in the STEM space which is not as common for women to be in, to show that there is the potential to lead a company in that space is the best part about it. It's not just girls, there are adults who question if they should take that route. I hope they see me and say "I can do that too"!